skip to main | skip to sidebar

This Mark Miller. Jon Haddock asked that I contribute to this blog. I am going to do the opposite of Jon in my entries. He writes intelligent things that enlarge everyone's world and comment on things that people can relate to. Jon taught me to do that in my work a little more. Unfortunately it has taken all I have to do that with my paintings. So I’ll take the easy way out and just write this as a diary, that should alienate the last few people who make it this far.

For about five years I have been doing these paintings from snapshots that I steal from Costco. I buy other people's photos and then paint them. I supplement these with photos other people steal for me. I haven’t gotten much response to my work over my career so I felt pretty anonymous and safe doing this. I thought I could do anything and no one would notice.

Recently I got a call from a TV reporter in Florida. He wanted to interview me about my work. I had a show opening in Florida that week so I thought it was about that. http://www.jema.us/pages/exhibitions.html I was pretty excited. I thought someone finally noticed, but I was also pretty scared about the whole Costco thing. I tried to think how to make myself unrecognizable to my friends at the local Costco. They all know me since I go there all the time. I tossed and turned all night. Then I got an idea: I'll shave my head and wear glasses. I was ready to go.

The next morning I arrived at the local NBC station. It was really weird. They just have this big ugly floor where everyone is mashed together at desks in cubicles trying to make the news. Reporters were standing before cameras reading lines without any “studio” except a tacky picture of the “newsroom” behind them. They had no sound insulation or anything. I was led to a messy corner with my own tacky picture behind me and a mass of chaotic keyboards and wires in front of me. Several news makers came over and asked if this was the “Picasso” that they had heard about. I think the way it was presented to them was there was supposed to be some kind of racy stolen photo porn painting thing happening. As soon as I showed them my paintings they stopped talking mid-sentence and walked away. One guy had to stay, he was the stoner technician. He told me I had to sit real still so my head stayed within these magic marker lines drawn on a monitor. The image of myself with cartoon lines holding my head was the only thing I had to stare at. I had to balance my paintings on the mass of tangled electronics in front of me trying not to push any flashing buttons. I was pretty scared and this was damn uncomfortable. I had a really loud earpiece stuck in my ear while the technician dialed all sorts of wrong numbers and made deafening screeching noises. Finally he got my guy in Florida and the transmission was going. The reporter in Florida asked if I could stand up and they could get a wide shot so they could see the paintings he asked me to bring in. No that was not possible, I had to sit there and keep my head in those lines. The reporter started to ask me something about how I steal the photos. I gave him a long winded technical answer making it clear that Costco no longer lets this happen. They scan everything and know everything you buy. He couldn’t even hear my answer, he just had to ask the technician if I was done answering. He more or less asked me the same question over and over again till I realized he didn’t care anything about the paintings. Finally he heard my answer and got all aggressive. He said his colleagues successfully bought his pictures last week to test the security and had no problem. I explained again that there was now a record of this transaction and he could find out who bought his pictures if he wanted. At this point he got really frustrated and started attacking me for “borrowing people’s pictures” ( I don’t keep the photos but return them to the bin). I was getting really nervous now. I had some sympathy for Bush in the debates. All I could see was my own face staring back at me in the monitor. I started twitching and kind of weaving outside my cartoon lines. Watching myself made me even more nervous. The more he attacked the more I twitched. Then he asked how much I made off these paintings from stolen pictures. I said, “I don’t make anything. I lose money painting them,” then really embarrassingly, “I am just trying to beautify the world one roll at a time.” The reporter asked, “How do you think the people in the photos would feel about this”. I mumbled, “Well everyone I have asked said they would be honored to have me work for six months off their photos.” Which of course was a lie, some people are horrified. After that he said, “well hold your paintings up and say anything you want about them.” I tried to fit them in the monitor by leaning as far back as I could in the chair and saying something about whitelead.com. Then it was over.

After all this I was very scared to show up at Costco. I even drove back home and got a hat to put on so no one would associate that bald criminal with me. I pulled the cap on as low as I could and went in. When I got my usual mocha the food manager said, “Hey Mark I see you shaved your head.”
Posted by Mark Takamichi Miller at 8:07 PM No comments:


During the last decade, I have used snapshots as a starting point for my work.  Instead of painting solely from found photos, I have also bought anonymous (unsuspecting) customers' snapshots, made them into paintings, and then returned the photos of my paintings to the original owner.  Many of my shows are titled in reference to this--such as "Second Set Free".  My goal is to force the unsuspecting viewer into re-examining the casual photograph.

Painting can have the aura of the carefully examined handmade object, designed to call attention to the smallest detail of the subject matter. This aura can become threatening when applied to private images not meant for public perusal. I strive to create that shock of invasion, when the viewer becomes acutely aware of the trans-formative elements that turn photo to paint.  The literal details frozen into a snapshot are replaced with formal qualities thrusting composition, surface, material, and color into the public eye.  I never change the composition of the photo or alter its subject matter, but I enhance the abstract qualities of the image in an attempt to make it beautiful.  If successful, the unconscious appreciation of that beauty will surface, while the mind is charged by the dissection of before and after.

In this way, I parallel the role of early proponents of Modernism such as Alfred Barr, who believed it was their job to expose mass audiences to formal paintings and deny their focus on literal subject matter.  While I subscribe to the underlying tenets of the modernists, I look for more covert means to express them-- a subversion from below rather than an imposed enlightenment from above.  I start with the most throwaway of images--the quick and easy photo snapshot--and through the use of visceral materials and time give them a new meaning.

The Miller School of Art officially opened last night, Saturday, March 13th, during Georgetown's monthly Art Attack. Many people showed up. There were many admirers of all the great work. Thanks to all the artists who showed their paintings and made the opening of the School a great success! Also a big Thank You to everyone who helped get it together. 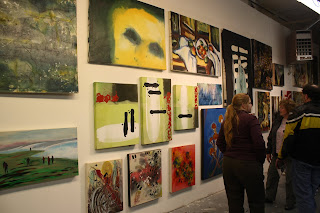 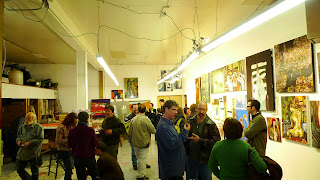 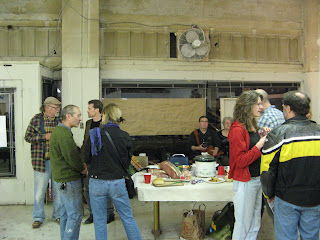 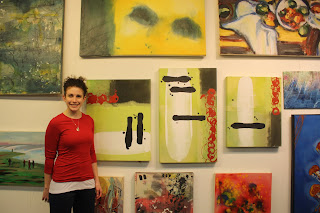 Posted by Mark Takamichi Miller at 9:04 PM No comments: